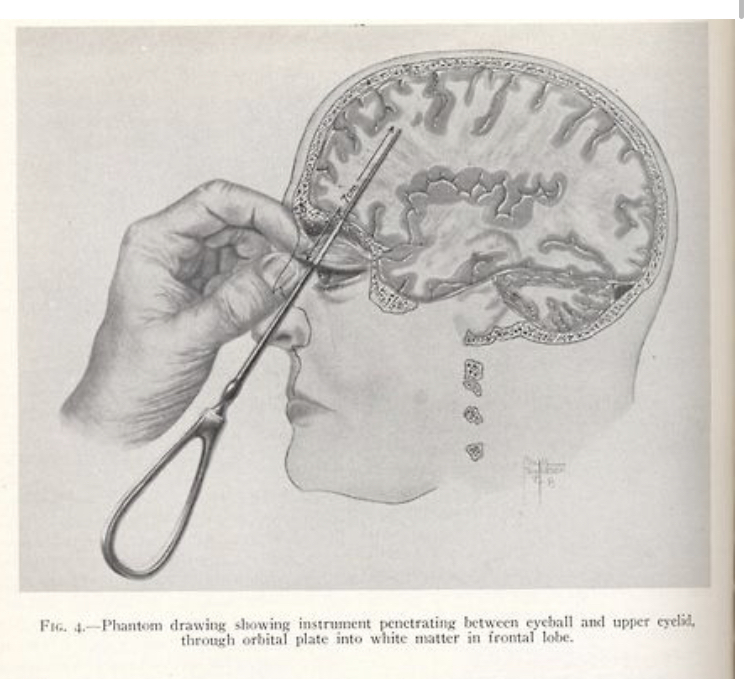 The Science Is Unsettling

The Science Is Unsettling: Walter Freeman and the Ice Pick Lobotomy

Dr. Freeman became well-known for the pre-orbital lobotomy. The procedure began with electric shock that took the place of anesthesia, followed by the insertion of an ice-pick like instrument through a person’s tear duct in his or her eye socket, hammering through the scull, and piercing into the brain several inches. Freeman then wiggled the “ice pick” back and forth in the prefrontal cortex section of the brain, severing connections. He then repeated the process in the other eye socket. The whole procedure took around 10 minutes. Medical experts at the time viewed it as a “surgery for the soul,” one which could treat everything from mild depression to schizophrenia. It was used for any ailment from a migraine to postpartum depression.

Freeman’s patients often had to be retaught how to eat and use the bathroom. He did not wear gloves, nor a mask during his procedures. He lobotomized 19 minors, the youngest patient was 4 years old.

One of his most famous patients was Rosemary Kennedy, the sister of the late President, John F. Kennedy. Rosemary’s mother, Rose, experienced a traumatic birth injury. A nurse would not let her mother deliver until the doctor arrived, and pushed the little Rose back into the birth canal for several hours, starving the newborn of oxygen, causing lasting brain damage. In 1941, when Rose was 23 years old, her father Joe took her to Dr. Freeman who performed one of his pre-orbital lobotomies on the young woman. However, after the procedure, Rosemary could no longer speak or walk, and ended up spending months institutionalized to receive physical therapy. After that, her cognitive level was said to be that of a two-year-old.

Throughout Dr. Freeman’s years as a practicing lobotomist, hundreds of patient died during or immediately after the operation. In 1951, he posed for a photo during the procedure, and the instrument penetrated too deeply into the patient’s brain, killing him.

Despite the fact that Freeman had no formal surgical training, and the risky procedure had a 14 percent fatality rate, Freeman did not lose his license until 1967. —-
Every generation is failed by the next generation’s science.

Our Bodies Are Home To Trillions of Microbes