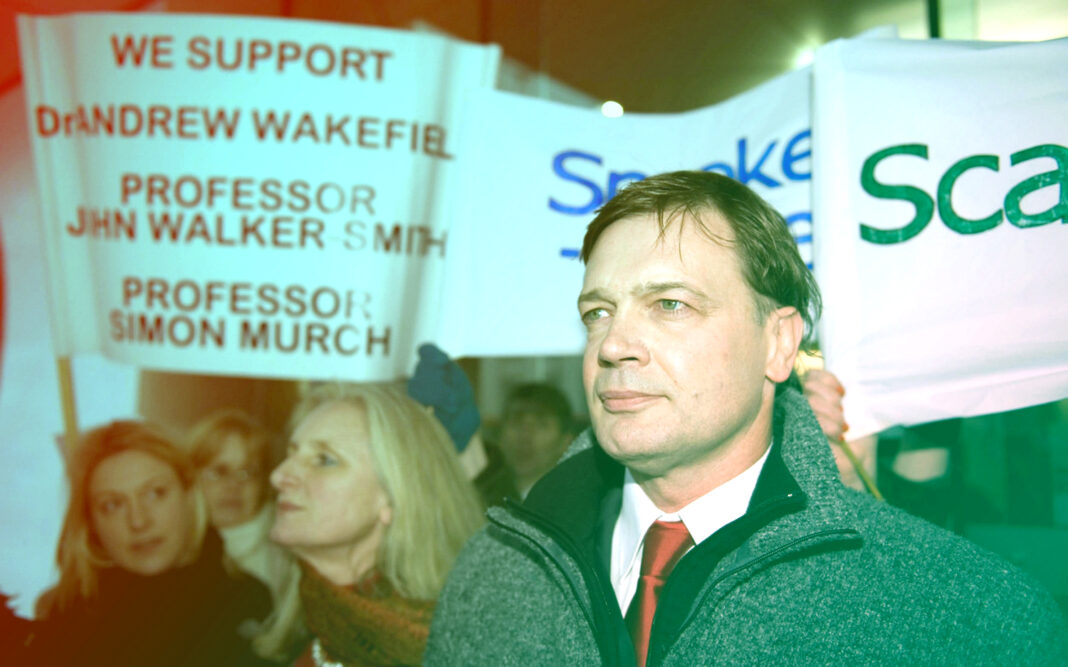 Why was Wakefield’s paper retracted?

Here’s the actual reason why the paper was retracted:

Following the judgment of the UK General Medical Council’s Fitness to Practise Panel on Jan 28, 2010, it has become clear that several elements of the 1998 paper by Wakefield et al are incorrect, contrary to the findings of an earlier investigation. In particular, the claims in the original paper that children were “consecutively referred” and that investigations were “approved” by the local ethics committee have been proven to be false. Therefore we fully retract this paper from the published record.

The paper was retracted because the GMC believed that the patients were not “consecutively referred” and that they performed “research tests” that were not approved by the ethics committee.

The GMC panel accused Wakefield that they had basically cherry picked their subjects in order to get the results that they wanted in their study, rather than having them properly referred by other doctors…

But the children WERE referred to Dr Wakefield and Dr Walker-Smith, both of whom are gastroenterologists, by their general practitioner because ALL these children had inflammatory bowel disease.

Think of it this way. If you go to the general doctor, and you have some really weird skin disease or rash, because of a substance you touched, that even the doctor cannot figure out, they will refer you to a dermatologist. This is called a referral. When you go see the dermatologist, they will reassess you and perform the appropriate clinical tests for you. Does that doctor require approval from an ethics committee before performing clinical tests on you? Of course not.

Now, if the study gets published, saying that there seems to be a correlation between substance X and this rash, should the case series study be retracted since doctors referred patients with this rash to the dermatologist? Was the dermatologist hand picking their subjects for this “case study”?

If you look at the 1990 guidance of the Royal College of Physicians (which was relevant during the time that the Wakefield study was conducted), a section called “Research Involving Patients”, detailed the difference between what is considered a “research” test and a “clinical” test.

So the question now becomes, did Wakefield and Walker-Smith perform these procedures for the benefit of their patients, or were they doing it to simply test for a hypothesis?

The Intention of Dr Walker-Smith

The British Pediatric Association’s guidance regarding ethics was that it was considered to be unethical to submit a child to more than minimal risk procedures when the procedure offers no or a slight or very uncertain benefit to them.

Here was a statement made by Professor Walker-Smith, during the ethics approval process for the study, in which he recognized that some of the procedures were “high risk”, but he explained that despite the study, he would have performed these tests regardless (excerpts):

…Clearly this is an intensive regime with procedures that could be regarded as “high” risk although they are particularly used for the investigation of children with chronic inflammatory bowel disease. These children suffer from a disease with a “hopeless prognosis” in relation to their cerebral disintegrative disorder. They have often not had the level of investigation which we would regard as adequate for a child presenting with such a devastating condition. In relation to their gastrointestinal symptoms which will be present in all the children we investigate, these have often been under-investigated. We have so far investigated five such children on a clinical need basis, all in fact have proved to have evidence of chronic bowel inflammation.

One child has already had a significant response to enteral feeding. Certainly there is a measurable benefit to the child:

…I can confirm that CHILDREN WOULD HAVE THESE INVESTIGATIONS even if there were no trial. I must make clear that we would not be investigating children without gastrointestinal symptoms. (emphasis mine)

Therefore, Professor Walker-Smith made known to the Ethics Committee that he would have performed these “high-risk” procedures, even if there was NO study, as he believed that there were measurable benefits to the child.

What was the outcome of the Lancet Children?

…every case investigations were followed by a discharge letter prepared by Dr. Casson which set out a diagnosis of the child’s condition and by a recommendation for treatment. In some cases, the treatment produced an apparent marked improvement in gastrointestinal symptoms and behaviour.

In other words, the work that Wakefield and Walker-Smith has done for these children was that their conditions IMPROVED. Their inflammatory bowel disease was LESSENED and their autistic behavior was IMPROVED. This is a MEASUREABLE benefit to the child.

Does it sound like these doctors should have lost their medical license when they clearly helped these poor children with chronic inflammatory bowel disease and their autistic behavior?

Just read the letter that was written and signed by the parents of the Lancet 12 (I’ll post an excerpt here):

Among the many allegations made are the suggestions that the doctors acted inappropriately regarding our children, that Dr. Wakefield “solicited them for research purposes” and that our children had not been referred in the usual way by their own GPs. It is also claimed that our children were given unnecessary and invasive investigations for the purpose of research, and not in their interest.

We know this was not so. All of our children were referred to Professor Walker-Smith in the proper way in order that their severe, long-standing and distressing gastroenterological symptoms could be fully investigated and treated by the foremost paediatric gastroenterologists in the UK. Many of us had been to several other doctors in our quest to get help for our children but not until we saw Professor Walker-Smith and his colleagues were full investigations undertaken.

We were all treated with utmost professionalism and respect by all three of these doctors. Throughout our children’s care at the Royal Free Hospital we were kept fully informed about the investigations recommended and the treatment plans which evolved. All of the investigations were carried out without distress to our children, many of whom made great improvements on treatment so that for the first time in years they were finally pain free.

You can listen to the entire letter, read by one of the Lancet parents, here:

For the first time in years, they were finally pain free…. this speaks volumes to me as they sought out other doctors who could not help their children. These doctors listened to the parents and their suffering children and did their absolute best to treat them. And these doctors lost their license when they were accused of blaming MMR for their condition. How many more are out there with children with autism and cannot find a doctor who can help heal them?

To me, this is utterly pathetic, the GMC should be absolutely ashamed of themselves.

In addition to Wakefield’s claim that the MMR triple shot safety was questionable, thus recommending the single shots, the Cochrane review also came to the same conclusions about its safety (inconclusive):

We could assess no significant association between MMR immunisation and the following conditions: autism, asthma, leukaemia, hay fever, type 1 diabetes, gait disturbance, Crohn’s disease, demyelinating diseases, or bacterial or viral infections. The methodological quality of many of the included studies made it difficult to generalise their results.

Just how bad is the science becoming that even the Cochrane review board cannot generalize MMR’s association to other adverse reactions because their methodological quality is questionable….