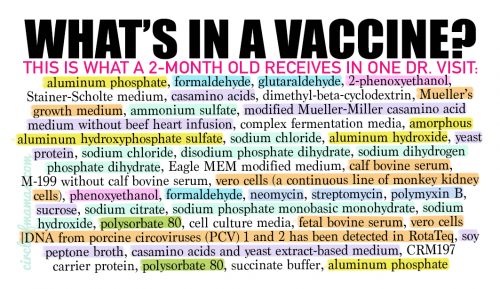 A common misconception is that vaccines are simply antigens and saline. But the truth is that vaccines are classified as biologicals because they contain human and animal blood and blood components, tissues, proteins and DNA. They also contain adjuvants (which irritate and excite the immune system to create a response), preservatives, antibiotics, and food proteins.

Vaccines do not come into the body the same way that a natural infection would, for example wild measles is inhaled, but the vaccine is injected. This means that vaccines have an exposure to the nervous system much more quickly via injection, than through the normal inhalation and processing of the lymphatic system.”

Excipient Quantities in Each Dose:

The FDA set the “safe” limit of aluminum for parenteral (non oral) nutrition to be 4-5 mcg/kg aluminum per day for premature infants because of concerns over toxicity.

Multiple vaccines are injected in one sitting and can contain 200 times the amount allowed by the FDA for oral consumption. Injection is NOT SAFER than oral exposure. It’s WORSE.

In order for a vaccine to create an immune response, it needs an adjuvant. Aluminum is the adjuvant of choice, because it causes an over-exaggerated immune response, and is extremely inexpensive. However, aluminum is a bio toxin. There is no biological necessity for aluminum. It is regarded as a neurotoxic and cytotoxic substance, which is why it is chosen to be an adjuvant in vaccine. Aluminum is used to enhance antibody and cellular immune responses. The antigens in a vaccine are adsorbed onto aluminum, forming a bond that isn’t well understood from an immunological perspective or an adjuvant perspective.

There are 3 types of aluminum that may be in vaccines:

When your body sends immune cells to respond to a vaccine, it sends in macrophages to engulf these aluminum-antigen complexes, which in turn kills the cells. This signals an even bigger immune response, that ‘something’ is damaging the body, and will attract more immune cells and will actively process ANY antigen that is bound to the aluminum particulates while forming an inflammatory response. One problem is that the immune system does not selectively react to only disease-causing substances, but ANY substance in the vaccine.

Injected aluminum leads to motor deficits and motor neuron degeneration. Aluminum is suspected in the etiology of Alzheimer’s disease. High concentrations of aluminum were found in the brains of autistic individuals. Unlike ingested aluminum which is estimated to be less than one percent absorbed into the blood stream via the gastrointestinal tract, injected aluminum is 100 percent dealt with by the body, including transport via white blood cells.

“Intramuscular injection of alum-containing vaccine was associated with the appearance of aluminum deposits in distant organs, such as spleen and brain where they were still detected one year after injection.” (study)

Injected aluminum adjuvants are more accessible to the brain than ingested aluminum, which is found in infant formula, water, antacids, baked goods, cookware, and more. For a deeper look into injected aluminum, please read this.

“Hazardous in case of skin contact (irritant), of eye contact (irritant), of ingestion, of inhalation. Corrosive to eyes and skin. The amount of tissue damage depends on length of contact. Eye contact can result in corneal damage or blindness. Skin contact can produce inflammation and blistering. Inhalation of dust will produce irritation to gastro-intestinal or respiratory tract, characterized by burning, sneezing and coughing. Severe over-exposure can produce lung damage, choking, unconsciousness or death.”

How much aluminum adjuvant are you getting in vaccines?

“The MRC-5 cell line was developed in September 1966 from lung tissue taken from a 14 week fetus aborted for psychiatric reason from a 27 year old physically healthy woman. The cell morphology is fibroblast-like. The karyotype is 46,XY; normal diploid male. Cumulative population doublings to senescence is 42-48. G6PD isoenzyme is type B.”

And WI-38 (Wistar Institute-38) which are in MMR, Varicella, Hep A, Polio and Rabies:

“The WI-38 cell line was developed in July 1962 from lung tissue taken from a therapeutically aborted fetus of about 3 months gestational age. Cells released by trypsin digestion of the lung tissue were used for the primary culture. The cell morphology is fibroblast-like. The karyotype is 46,XX; normal diploid female. A maximum lifespan of 50 population doublings for this culture was obtained at the Repository. A thymidine labelling index of 86% was obtained after recovery. G6PD is isoenzyme type B. This culture of WI-38 is an expansion from passage 9 frozen cells obtained from the submitter.”

There is evidence that food proteins in vaccines can sensitize a baby, which creates a food allergy or multiple food allergies the world has never seen before.

“The substance is toxic to kidneys, the nervous system, liver. Repeated or prolonged exposure to the substance can produce target organs damage. Very hazardous in case of skin contact (irritant), of ingestion, of inhalation.”

“It may be a possible mutagen. It has been tested for mutagenicity, but so far tests have been inconclusive or test information has not been made available. However, if enough is absorbed systemically it may produce Ammonia poisoning. Symptoms may include gastrointestinal (digestive) tract irritation with nausea, vomiting, hypermotility, diarrhea. May also affect eyes (Mydriasis), behavior/central nervous system (somnolence, tremor, convulsions, muscle contraction or spasticity), and respiratory system (respiratory stimulation, dyspnea).”

Ammonium Sulfate is in Daptacel: