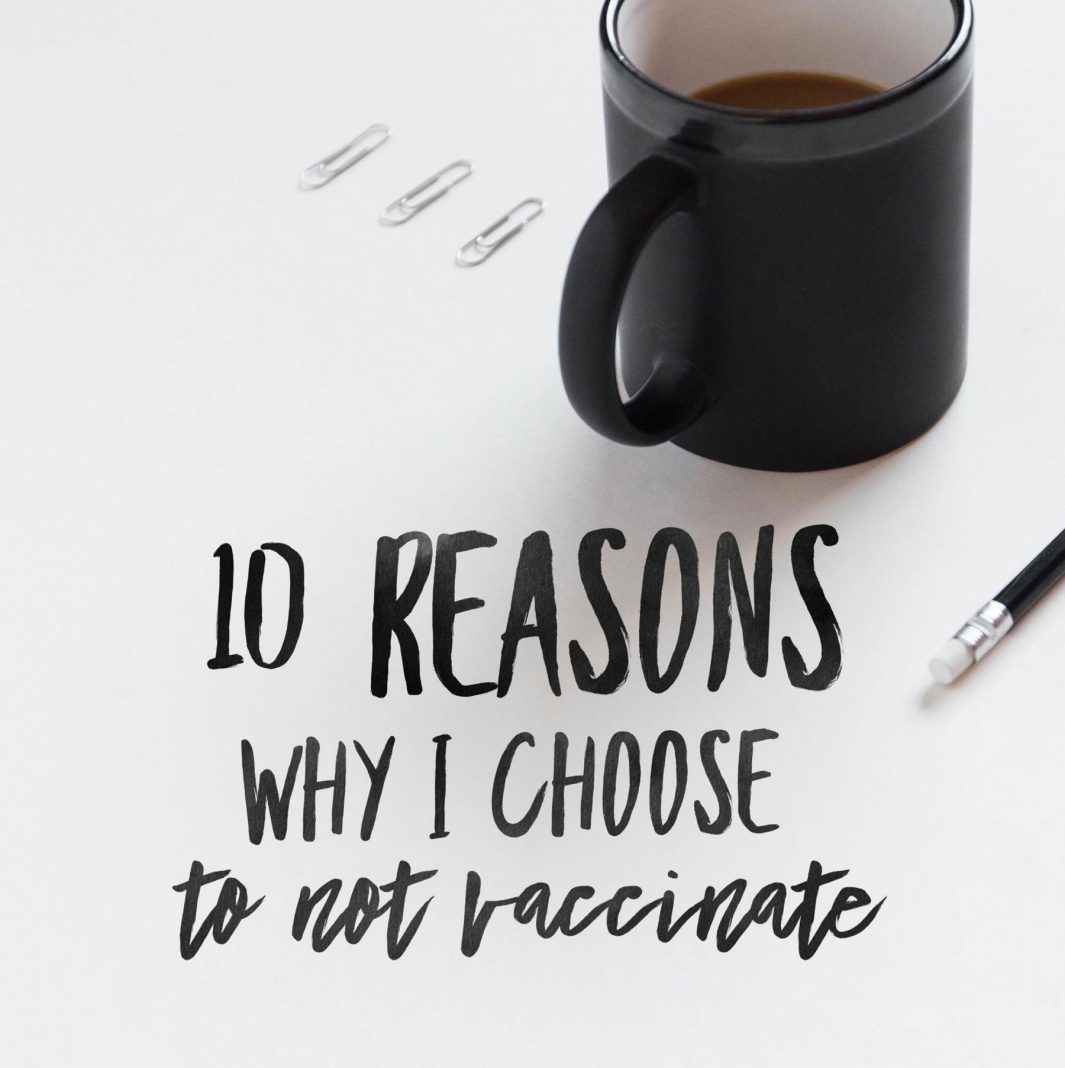 10 Reasons Why I Choose Not To Vaccinate

1. Toxic substances and fragments of human DNA from aborted fetal cells used in vaccine production can irreparably harm the body, increase the risk of infections, cause anaphylaxis, chronic neurological or autoimmune illness, or worse (e.g. SIDS / death). Independent, unbiased medical research from scientists, doctors, and experts in countries around the world supports these statements, as does VAERS, the VICP, and tens of thousands of parents in the US alone who are aware of the risks of vaccination and have experienced their own children being harmed or killed by vaccines. Three million or more adverse events from vaccines occur each year in the US. #wedid #hearthiswell

2. Vaccines can cause the very illnesses they’re supposed to prevent (measles, mumps, meningitis, paralysis, rotavirus, chicken pox…). Read the vaccine inserts, these are all listed. Live virus vaccine shedding is real and we may never truly know the extent of the problem, due to the fact that doctors do not document post-vaccination measles – as measles, for example, or because they claim adverse events are unrelated to the vaccines received just days or weeks prior (for example, if a previously healthy child is hospitalized with an infection after receiving several vaccines). Post-vaccination measles is typically downplayed as a “measles-like rash and a fever” (which is measles) and is considered a “normal” or “common” response to the vaccine. One study suggested that around 5% of MMR-vaccinated individuals develops measles symptoms post-vaccination, and that wild type measles is indistinguishable from vaccine-associated measles.

3. Vaccines did not save us from dying of these infections. Infectious disease mortality dropped prior to the introduction of vaccines, due to improved nutrition, sanitation, clean water, better hygiene, environmental regulations, food safety practices, and more. Improved nutrition is largely what began to improve outcomes and prevent death or complications from these infections. Not vaccines. For example, 99.9998% of the 180.7 million people living in the US in 1960, did not die of measles, even though there was no vaccine for measles and it is estimated that 4-5 million people contracted the infection that year.

4. The diseases we vaccinate for are treatable and typically not deadly for anyone living in developed nations. We now know through research that vitamin A prevents measles complications and may help treat mumps and chicken pox. It was known long ago that vitamin C can help reduce the severity and longevity of whooping cough. Vitamin C has also been found in scientific research to help treat tetanus, hepatitis, and more. All infections can be deadly in developing nations, due to severe malnutrition. While there is research confirming all of the above, it is not well known because it would undermine the vaccine program.

5. Vaccine manufacturers cannot be sued if your child is harmed by a vaccine. They are protected by the law. You are not. You are responsible for what happens to your child after they are vaccinated – not the manufacturer, not the clinic, not the doctor, not the nurse… you. No one else is. The 1986 National Childhood Vaccine Injury Act was created to protect vaccine manufacturers and the medical professionals who administer them… not your child.

6. Fraud. Every single vaccine manufacturer has been convicted of fraud. They have been caught fabricating and omitting data for clinical trials, creating fake medical journals, bribing doctors, promoting untested products that they knew were going to cause serious and severe harm to thousands upon thousands of people… The CDC is also untrustworthy and owns vaccine patents. Whistleblowers at the CDC – senior scientists who work there – have come forward attempting to expose the widespread corruption within the organization. The FDA has been caught covering up fraud in medical trials, and more. The CDC and FDA act more as arms of the industry itself rather than regulate it in defense of public health. Unfortunately most don’t know about this, because 70% of all news division revenues during non-election years come from pharmaceutical companies. #cdcspider #vaxxed

7. Vaccines do not provide herd immunity. A percentage of individuals do not respond to vaccination at all (they do not develop antibodies), and some vaccines and their boosters do not sustain the production of antibodies for more than a few years (“waning immunity”). This is why many outbreaks occur in populations with near complete vaccine coverage or in fully vaccinated populations. The vaccine program has actually left infants – our most sensitive population – even more vulnerable to infection. Before vaccines, children contracted many of these temporary illnesses around 8-12 years of age, when it was much safer to do so. The girls would have lifetime immunity, grow up, and transfer passive immunity to their newborns through the placenta and breastmilk. This passive immunity would protect infants at their most vulnerable age. The implementation of the vaccine program has eliminated this natural protection.

8. Lack of true placebo clinical studies. There are no studies on the CDC schedule as is (72+ vaccine doses by age 18). No long term safety studies, no studies on carcinogenicity or mutagenicity. All of the manufacturers’ clinical studies for childhood vaccines approved for use in the US, use either another vaccine or the aluminum adjuvant as the control group. Never a true saline, harmless placebo. They often only monitor for less than a month, or even less than four days post-vaccination. When the administration of both the test (new vaccine) and control groups (old vaccine or aluminum adjuvant) result in the same number of adverse events and deaths, they claim the new vaccine is “safe”.

9. Lack of scientific research proving safety of vaccine ingredients. No safe limit of injection of aluminum has EVER been scientifically determined. The FDA granted it “GRAS” (generally recognized as safe) status in 1975 without any real science to support this move. No safe limit for injection of thimerosal (or ethylmercury) has ever been determined. These are considered “safe” based on ingestion of these substances or similar ones, which cannot be compared to injecting them. Route of exposure determines toxicity, not dose alone.

10. Medical doctors have professed that they do not learn about vaccine ingredients and their toxicity, the true range and diversity of vaccine adverse events, and much more regarding this issue. Medical education is highly manipulated by the pharmaceutical industry and doctors are financially compensated by insurance companies to administer vaccines in a timely manner.